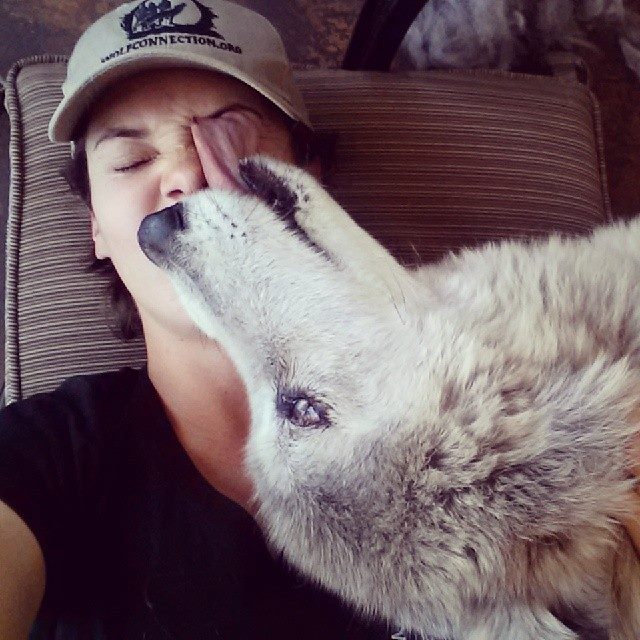 Nina didn't know that her life would be transformed when she woke up one spring morning a few months ago. “Some wolves are coming to the residential treatment home … that’s cool!” she thought. Nina had been abused and neglected as a child. She grew up in a hostile environment, being segregated and bullied at school, feeling unwelcome everywhere she went. As a young adult Nina carried huge anger, resentment, and mistrust … her heart was closed. She was also agoraphobic, afraid of open spaces, of being in nature, walking on dirt or cracking dry leaves that she had a hard time leaving the house or even her room and she couldn't step on cracks on the floor, so she would tiptoe around the house hopping from tile to tile. In an effort to numb the pain she turned to alcohol and drugs which landed Nina in the rehab center where these events took place. Her therapists didn't know how to help her and she was losing hope. That’s the world Nina knew … but not that day.

As she was getting ready that morning, a 120lb timberwolf named Miko walked into her room and gently convinced her to come out of the house and join everyone outside. Nina learned the first Wolf Principle: “Wolves are always OK with who they are” and she felt an instant bond of trust and strength. When the group of humans and wolves began hiking up the trail, she decided to come along. A whole mile into the mountains, Nina was still hiking enthusiastically next to the wolves, that’s when she learned the second Wolf Principle: “Wolves give 100% to everything they do.” She began feeling a forgotten sense of confidence, perhaps from when she was a little child when she didn't have a care in the world, she wasn't sure, all she knew was that she wanted to inhabit this new sense of inner peace and freedom, she wanted to run with the wolves and jump and laugh! She heard another Wolf Principle during this outing: “Wolves explore all the time, they don’t come with judgments and pre-conceived ideas.” YES! She heard an inner voice saying and she decided to approach her favorite wolf and introduce herself the way she was told, but Miko the wolf had further plans. As Nina knelt down, Miko came to her as a long-time friend, licking Nina’s face and leaning on her until she sat on Nina’s lap, causing her to fall back on the ground. For several minutes they rolled and rolled on the dirt and fallen leaves in complete freedom and joy, human and wolf as one. Nina’s smile was unforgettable. All she could say over and over was “wait till doctor Silverman finds out” (her Psychiatrist). Miko changed Nina’s life that morning … IT WAS A THIS-IS-IT MOMENT FOR NINA. As a result Nina was discharged from the residential treatment home earlier than expected, she applied for a therapy dog and, with its help, she is now working and back in college.

You need to be a member of Wolf Connection to add comments!

What a great inspiring story :) I'm glad Nina found her way to freedom through herself and with Miko's help!